Forgotten folk songs of St Kilda have now been discovered. The small island of St Kilda located 40 miles west of Scotland’s Isle of Lewis is one of the most isolated places located near the United Kingdom.

After years of islanders living a very simple way of life hunting sea birds and making tweed out of sheep’s wool St Kilda is now a beautiful attraction where visitors can enjoy a peaceful and relaxing break, escaping from the busy and demanding city life they may lead 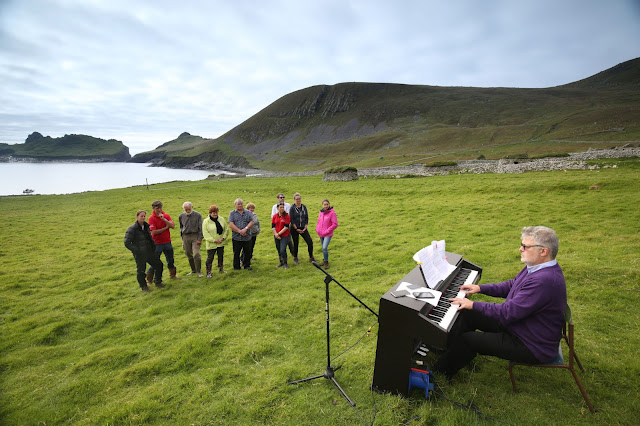 Recently there has been a discovery with the old folk songs of St Kilda. These came from islanders who would sing work, love and funeral songs including one wedding song which was found. The island itself was strictly under the influence of the Protestant Church in the 1800s and any singing of songs other than psalms was extremely frowned upon.

Trevor Morrison, a Scottish man who in the Second World War was evacuated to the Isle of Bute as a boy was taught by a piano tutor from St Kilda. The tutor ensured that the young boy were to learn these songs and carry on the music of St. Kilda.

Morrison now entertains fellow residents in a care home in Edinburgh with the lost songs of St. Kilda granting his piano tutor’s wish.

Classic FM decided to really celebrate this music so therefore travelled 40 miles across the Atlantic Ocean from Skye to St Kilda by boat, all packed up with a digital piano on board.

Once arriving at their destination Sir James Macmillan sat on just his piano stool at the digital piano they had transported and began to play the forgotten folk music. These songs included beautiful renditions of ‘Stac Lee’ and ‘Hirta’ and many more.

The former residents of St Kilda would not have had the privilege of listening to the sounds of digital pianos to accompany their singing in the 1800s so therefore with the help of Scottish composers such as Craig Armstrong this music has been arranged to be played with piano.

This wonderful discovery of the forgotten songs will open doors to many more folk songs which could be hidden from our world today. Now with the wonderful works and transformations of composers and musicians today we can finally bring this lost music back to life.