If you have always wanted to be the proud owner of Elvis’ gold piano, and have about a million dollars to spare, then you are in luck!! At an auction next month in the USA, this lavish piano is being auctioned off alongside some Beatles memorabilia. As far as memorabilia goes, this piano is not expected to fetch a lot of money. Back in 2011, Marolyn Monroe’s iconic white dress fetched a jaw-dropping $4.6 million, but the piano in November’s auction is only estimated to make between half a million and a million. 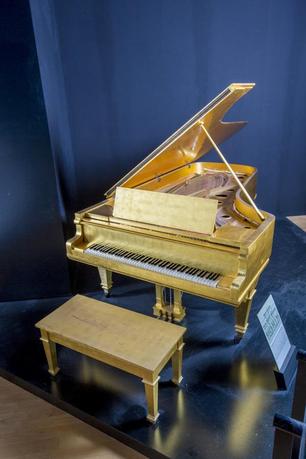 The piano is being sold by a mysterious benefactor who has clearly decided that he no longer has a use for a gold leaf grand piano, previously owned by The King’s mother, and then The King himself. No doubt this mysterious seller saw other pianos on the market and realised that his was clunky and outdated. Perhaps he saw some of the revelations in the space piano market and decided he would be better off spending the money he will make from the Elvis piano on something that has the capacity to translate star data into sound. Personally if I had a spare million, I think I would rather have Elvis’ piano rather than a digital piano with ridiculous features than I would never use, but that’s just personal preference…

Elvis history at your fingertips!

This piano is a piece of history and along with it comes a little piece of the King’s soul. Imagine sitting at the stool, playing this gold beast (yes, it is slightly hideous but we can overlook that)… Your fingertips are touching the same ivory key tops that Elvis himself used to play. For a moment you can imagine you are the King. This is where he used to sit, where he played his hits.. for that alone surely this piano is worth more than money.

Of course, not all of us have the luxury of being able to choose between an iconic piece of rock ‘n’ roll history and a space age wonder. For most of us however, a bog standard electric piano will do just fine. For a couple of hundred quid we can be in action, and rest assured our playing on a digital piano will actually sound much the same as it would on the Elvis piano (and probably a lot nicer than one of the bonkers star pianos). Of course, if a fully functional electric piano won’t cut the mustard for you, then you better count your pennies and head over to the US next month.