Blue is a word we associate first and foremost with colour. Blue however has many other connotations from the sensible to the censored. On screen Blue is a the name given to films that span Japan to Bollywood and in the world of music Blue heads an array of songs and albums from as diverse genres as Joni Mitchell to Linkin Park. Blue is the precious guitar owned by Billie Joe Armstrong, member of the punk rock band Green Day and the name of a full scale piano concerto by British composer Matthew King. But this colour pales into insignificance without mention of the R&B band 2000 Blue. This foursome boy band have made success bigger and brighter than most despite a lull in their early years and are presently performing at their peak. Avid fans think they’ve ‘dyed and gone to heaven’ with Blue as their favourite colour. 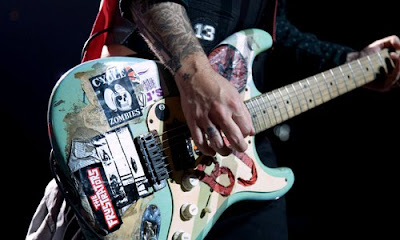 The First Sounds of Blue

The quartet originally formed in 2000 and released three albums in quick succession. ‘’All Rise’’,‘’One Love’’ and ‘’Guilty’’ are all formulated around the same thematic fencing of young love. The former ‘’All Rise’’ holds a refreshing surprise as the intro is fronted by a digital piano sound by way of a harmonica.

winds itself round minimalist ‘’yoyo’’ murmurings from the groups front man giving an interesting feel of ballad and rap united. It’s a little top heavy with use of a vocoder but pleasant to the ear and appealing to the teenage fan.

Love On The Line

Similarly ‘’One Love’’ is a more complex affair but nonetheless synth-driven with a less than charming ascending raspberry at the onset that reappeared at intervals throughout the track! Additional digital piano synth strings soften the attack of the off-beat and help to raise the immature ‘raspberries’ to a more fruitful level of sophistication. The lyrics uphold the title of young love:

The third albumen titled ‘’Guilty’’ follows the same path as its two predecessors with simplistic primary chord patterns of I, IV and V and lyrics of game playing and bleary-eyed decorative overtones.

All three albums respectively hit number one in the UK giving Blue the musical ‘leg up’ they needed. Blue’s work with legendary artists including Stevie Wonder and Elton John has undoubtedly enhanced their success further and with the boy bands contribution to the 2011 Eurovision Song Contest which left Blue to fly the flag for the UK they have gained additional exposure as all round ‘’good eggs’’. A name to duck egg blue?..